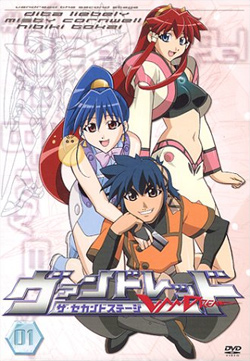 Plot Summary: Though Hibiki and crew defeated a super-huge battleship of the earth in the last of the first stage, they noticed five battleships further aiming at Mejeiru and Tarahk. And, crew of NIRVANA learnt Tarahk and Mejeiru which were their home had been faced to the crisis of Karitori ( reaping ). Travel to their home is speed up so that they may inform of the crisis. On the way, current information of the earth having been brought by girl Misty who had come to travel with them was worse than they can imagine. Hibiki and crew noticed a true fight was in the future. VANDREAD is finally changed into final system by the attack of the enemy who becomes violent more and more. Can they save their home? And, what happens to the relations between Hibiki and Dita?

Other name: ヴァンドレッド the second stage